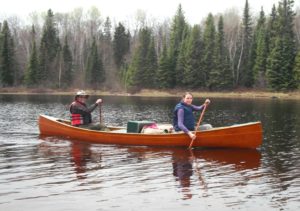 In the middle 1980s Dave was living in Winnipeg, Manitoba, and began wilderness travelling. Some friends had canoes and other equipment — one even had a dog team — and introduced him to that wonderful part of the world.

If you drove northeast from that city, the end of the road lay only 3 hours away. Beyond that was just Canadian Shield, the Boreal Forest, with a million lakes and rivers and ponds and streams running through it in all directions. By noon on any given day he could drive away, launch the canoe, paddle and portage once, and disappear.

It came to possess him (a line from one of his later songs). He bought every book on the subject he could find, ordered maps by the carton, built his first canoe, haunted yard sales and ads for used gear — and took trip after trip after trip. His skills improved and his trips got longer. He had a job, and a young family, so these weren’t all-season trips, but there were lots of them, and they didn’t stop during the winter.

Later, Dave and family moved near Barrie, ON, and he explored the Bush from there. Access wasn’t as good, but he discovered the Budd Car (train service) running NW out of Sudbury, and got dropped-off in the bush, winter or summer, many, many times. 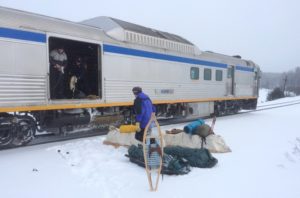 An inveterate tinkerer, Dave modified and invented many pieces of camp and travelling gear. Later he was asked to write-up articles for a monthly outdoor magazine (Bushwhacker — long defunct). This column, Practical Bush Gear, lasted for several years. Some of these “How-To” articles are reprinted here. 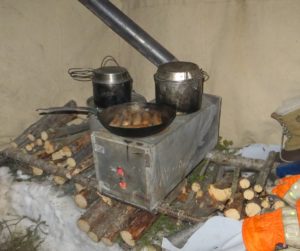 The Sun is a Compass