Too many of a pilot’s working days start with an alarm call at a horribly early hour. It’s always been known as “o-dark-thirty” – the idea being it’s so much before sunrise you can’t even figure out what hour it is, or what time zone you’re in. (O as in Oh, not zero.) But for this song I wanted to commemorate the life my son Austin had been leading, flying a Caravan and later a Beech 1900 in NW Ontario. He flew a lot – sometimes more than a dozen legs a day, with minimal support from any agency: no ATC, poor forecasting, primitive gravel runways, single-pilot, buck-shee IFR approaches… typical bush-flying in the modern era. (I picked his brain for the lyrics.)

The turbine engine has changed everything. No more pistons to leak oil, and coax into reluctant life on frozen mornings. And fewer engine-failure/forced-landings. The PT-6 is a magnificent Canadian success story.

The Bush hasn’t changed much. It’s still a hostile place to fly. It offers no forgiveness. Not all pilots who go up north last. Some try it, and then choose different paths…

I took a chance with this song because of the affinity with the title of the movie – although they say it as “zero”, which pilots don’t. But since that movie stole the phrase from aviation in the first place, I figured I had “dibbs”.

It’s O-dark-thirty, and I’m in my car.
Drivin’ to the airport, under fading stars
I am the pilot, gonna fly today,
Way up north, hauling freight away.

O-dark-thirty, I’ve got gas to burn.
I hit the start button, the propeller turns.
A PT-6, makes a lovely smell,
I’ll find it in heaven, or fear it in hell. 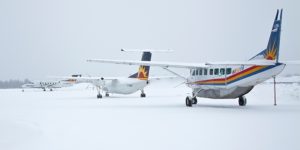 O-dark-thirty, and the turbine sings.
There’s a trace of snow, blowing off the wings
I line up and wait, between the rows of light
Hello dawn, good bye night.

North Spirit… head 015,
On the nav display, a magenta line.
It’s a gravel strip, no guarantees
One end is lake, and the other, trees.

We grease it on, taxi, and shut down
There’s a crowd of people, standin’ all around,
They lend a hand, unload the freight
Heavy cases, they don’t feel the weight

There’s a manager there, of the general store
She gives me a hug, I hug her back more.
The storms were bad – flights all delayed.
We’re the first plane in, for five whole days