The Hudson Bay Company had essentially a stable trading relationship with the natives of the north for 250 years.  It’s only in recent times that we messed that up.  In the 1980s when the HBC stopped buying  furs, the entire north changed. 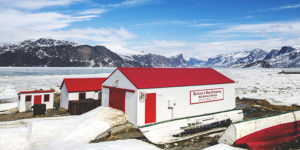 Though he remembers as a young man,
At the age of 23,
He left his home in Scotland, and sailed across the sea.
Was posted to the arctic, with a trading family,
And spent an iron winter there beyond the furthest tree.

At first the land appalled him, an icy endless hell.
And yet the men who lived there seemed to know and love it well.
Months without the sunlight, winds that never end.
Where the colour green is hardly seen, and a strong man learns to bend.

But in the south there comes a sunrise, the first in many weeks.
A vision of renewal, of hope and life it speaks.
And he felt the land awaken, yawn and stretch and stir,
And he was part of something grander than a simple quest for fur.

[Chorus …. on his doorstep]

The land came to possess him, but  the south was always there.
Crowds of men to talk to, girls with golden hair.
He went on leave one April; tasted southern life,
And when he came back north again, he brought with him a wife.

And though she tried to see the tundra, looking through his eyes,
She never found the freedom; she never grasped the prize.
She sickened in the winter, of what he never learned.
And when the bush plane flew her out she never would return.

[Chorus ….for a front yard]

His work at times consoled him, but  the pain was always there.
A young man needs a partner, a future he can share.
In time he married Norah, a Chipewyan girl.
She was strong and warm, and came to form the center of his world.

And later when his sons came, he raised them on the land;
Children of the freedom that lay there on every hand.
And pressure came upon him to send them off out south,
But they learned their letters from his hand and stories from his mouth.

The land goes on forever but the  years go flashing past.
His thick red hair went silver. They promoted him at last,
And shipped him to an office, and worked him might and main,
But men like him were not the sort of men who would complain.

And he retired on a pension — they bought a little house,
And live a life of comfort; the kind they’d dreamed about.
And mornings he drinks coffee with old men just like he,
Telling tales of how the trade’s not like it used to be.