Home The Ballad of William McRae

The Ballad of William McRae

A large part of my adult life has been spent as a pilot volunteer for Vintage Wings of Canada, flying the WWII aircraft of the Mike Potter Aircraft Collection. It is truly a magnificent hangar full of flying heirlooms.

One of the old gentlemen who used to drop by was Bill MacRae, a sprightly and very involved ex-Spitfire pilot. A friend of mine researched Bill’s wartime career and learned that it was perfectly representative of the BCATP experience; from training in the Prairies, to dodging U-Boats in convoy across the Atlantic, to shooting down a ME-109 over the D-Day beaches.

I recorded this acapella, but with a marching-band snare drum to accentuate the martial aspect. It’s quite stark, but the casualty statistic from his initial Wings Course speaks for itself: 39 men achieved their wings – 20 made it back.

He is no longer with us, but I salute him. I salute all of them. 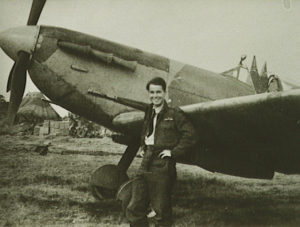 The Tiger Moth made me humble, The Harvard could make me weep.
I never knew I could work that hard; Some of us gone each week.
I passed the course, went on parade,  Under the Union Jack.
39 men received their wings;   20, made it, back.

A dark grey sea in winter,    In convoy as we should
But off the coast of Iceland,   The Bismark sank the Hood.
But battleships weren’t our problem,    ‘Cause there within the night,
U-Boats in a wolf pack,   Marked us in their sights. 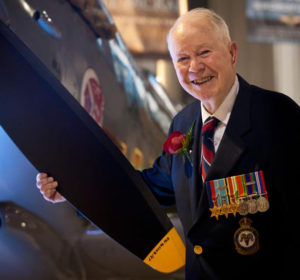 Explosions in the darkness,    Screams upon the sea
Flames across the ocean,    Oh God, please let me be…
A lot of men died in fire,   But most of cold, and shock
44 ships left Halifax;    Nine, never, docked.

Three years spent on Spitfires,   Now 50 more are gone,
And what do I remember,   But Merlins in the dawn.
And over the beach near D-Day,  A Messerschmidt turned on me
One of us landed safely,    One went in the sea.