If you read the literature of the North, you could come away with the impression that only men have experienced it. This is nonsense of course. There have been women in the bush for as long as men. But in the past they seldom wrote about it, and very little of their point of view survives.
I decided to write a song from a woman’s point of view. This was difficult, since I am gender-challenged (and it quite surprised my wife), but I thought of what it must have been like for the wife of a voyageur as she stood there on the river bank and watched her man paddle away for another 6 months, while her little children clung to her skirts and another swelled in her belly. Not at all the jolly paddling song we associate with the voyageurs.
I think I succeeded, though the song is sadder than I originally intended. I wondered how many of those women might’ve, just once, liked to paddle away themselves?

My brother Chris really likes this song, and in a very wonderful adaptation he tweaked a few words and made the theme universal. He then recorded it on his album from space: Songs From A Tin Can.

Caroline’s on her own, on the farm, among the trees.
Mind the field, tend the yard, work the garden, on hands and knees. 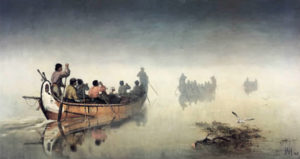 Caroline’s on her own, and the pains are coming fast.

And her sisters are there to help her,
But they’ve been crying ­ it cannot last.
She seems to break her bonds and lift beyond the room.
And soars away to see him in a flash,
And a journey is newly started, as a journey has come to pass.

She seems to break her bonds and lift beyond the room.
And soars away to see him in a flash,
And a journey is newly started, as a journey has come to pass.