Home The Skin I’m In

The Skin I’m In

Dave has always been a prolific songwriter. In addition to his wilderness songs, many others sprang from his curious mind. Also, several of the songs he sang with The Purveyors, such as 400 Waltz, and Emily’s Barn, were perennial crowd favorites. They needed to be preserved!

Brother Chris Hadfield sings on this one too with Prairie Graveyard, a true story about our great-grandfather’s personal tragedy shortly after he emigrated in 1909.

The Skin I’m In (named for one of the songs — a wry look at the aging process) was recorded and produced with the legendary Paul Mills, and released in 2008. For Dave, it was an honor to connect with the same person who had recorded and played with Stan Rogers, whose songwriting had such tremendous influence. The session musicians on this album are the best in the business.

With Paul Mills at the controls, the production is richer, more disciplined and complex than earlier work but what still shines through is great musical story telling.  Dave can be funny, fed-up, tender, poignant, or playful.  The writing is economical and engaging.  There are some great tales and catchy tunes here.  Emily’s Barn is the best sequel to John Denver’s Thank God I’m a Country Boy I’ve heard yet, especially with Don Reed’s cheeky fiddle flourishes.        James Raffan,  Writer and Historian

“The Skin I’m In”  can be purchased here…SHOP 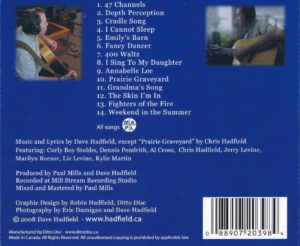 I Sing To My Daughter

The Skin I’m In

Fighters of the Fire

Weekend in the Summer

“The Skin I’m In” CDs can be purchased HERE

or the songs can be purchased through iTunes: