Home Chuck’s In The Air

Chuck’s In The Air

There is a grand tradition in Air Forces around the world of “The Squadron Song”. Singing, loudly, with great gusto and enthusiasm, accompanied often by alcohol, in the Mess, is something that started in WWI and has continued to this day.

This song was written by my brother Chris and sung by him and his squadron-mate Tristan DeKoninck, for Chuck Caron, who was the first RCAF pilot to rack-up 1000 hours in the CF-18, in about 1983. Chuck had ambitions to join Air Canada, and wanted flying-time, so he’d volunteer for ferry-flights and test-flights, and so on. (“4.8 Alpha” was thought to be the best angle-of-attack for endurance flight.) Chris and Tristan performed it at Chuck’s “mugging-out”, an event which happens in the bar, in flight suits, amongst just the pilots, before a more formal dinner somewhere else.

The other references are of course to incidents that happened during Chuck’s career, and were written to make the other pilots laugh.

Chuck went on to a long, successful career with Air Canada. Tristan unfortunately died in a Hornet accident at Summerside in 1985 – tragic, but an all-too-frequent story amongst military aviators.

Chris sings lead on this, and Phil and I and Kylie joined in to create as much of a squadron chorus as we could. 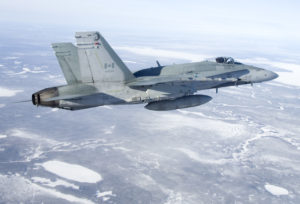 CO’s in a meeting, Rivard’s on the phone,
If it’s past 3 o’clock, then Brosseau’s at home
The rest of the squadron is goddam knows where,
But one thing’s for certain: Chuck’s in the air.

Min fuel by Gander so Chuck set her down,
And blew down the hangar while turning around
They called the General, the General called there,
Said, “Forget the dam building get Chuck in the air”

The Mayor of Dorval’s a personal friend,
So Chuck keeps going back there again and again,
Closed patterns in “burner”, they sure love him there,
The phone don’t stop ringing when Chuck’s in the air.

The phone keeps on ringin’ but no one’s around
Thumper walks over to answer the sound
“It’s Air Canada calling – is Chuck Caron there?”
“No, perhaps I can help you – Chuck’s in the air.”