The chorus of this song was first  written on the edge of a map while I was solo canoeing:  I had turned a corner in the  river; and then surprised what would become Riley’s antagonist.  (The creature was huge. The waves it generated when it slid into the water rocked my canoe.) The song-lines popped into my  head, and the map was the only handy paper around.

He drifted alone on a warm July day,
lay back and soaked up the sun on his way.
The current behind him, the wind – it had died.
He dangle his toes in the water beside.

Well Riley got airborne, he looped in the sky.
Landed aboard with a terrible cry,
looked at the place where his toe once had been
and the words that he used made the lakewater steam.

He hobbled, he limped, he walked like a geek.
(No reptile was safe in his sight for a week.)
He didn’t forget and it took quite a while,
to get back his balance and gain back his smile.

He’d nearly forgotten his poor pinkies fate,
while washing his pots and his pans in the lake.
Ten fingers splashing and scrubbing off grim;
Chomp, went the turtle and left only nine.

No need to describe what went  on in his mind;
he ranted and raved and swore he would find
the cause of his troubles – he wasn’t a dupe.
Hed’d find that turtle and make him some soup. 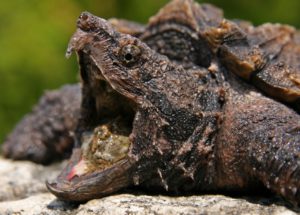 He hunted and fished – it became quiet a quest.
(Losing two digits is never a jest.)
He tried every trap and he used every lure,
but snappers are wise and not easy to lure.

So beaten, exhausted and thoroughly drained,
he knew fully well only one chance remained,
the snapper would rise to the ultimate bait;
he stripped off his clothes and jumped into the lake.

The fight was ferocious, the battle was tough.
The stakes were the highest – the penalties rough.
The water was torn by the force of the dual.
He’d win, or he’d give up the family jewels.

And later when Riley crawled up on the shore,        [4 beat pause]
he paddled out south and went roaming no more,
And a gigantic shell hangs up high on his wall,
and Riley has no kids – no kids at all.