It may sound strange, but in the early days of WWII, U-Boat Captains did occasionally allow the merchant crews to escape, particularly if they were sailing a traditional square-rig ship. And since torpedoes were expensive, and hoarded for use against more significant targets, the U-Boat’s deck-gun was used instead.

The facts behind this story are true, related by a Nova Scotia skipper in his memoirs. (The love interest, well, he wouldn’t say exactly.) One thing’s for sure, survival literature points very clearly to the fact that a powerful will to survive is essential. Even very strong men will succumb if they have nothing on which to focus their endurance.

I was second mate in ’38 on the schooner Alice B.
We damn near sank on the Georges Bank in a dirty month at sea.
We’d just come down to Halifax Town all ready for a spree,
Before that treat I thought I’d eat, so I went into a Bakery.

I’m not the kind to waste much time, I knew what I had to do,
But times were lean and I was clean of cash and prospects too.
So from that day I changed my way; no longer went on spree,
And all my pay got stashed away, or spent in the Bakery.

One year on, a winter’s morn at dawn, 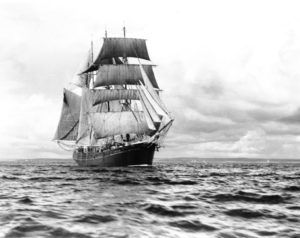 We were running north, hauling Cuban rum.
When close alongside, rose Hitler’s joy and pride:
A U-Boat, and on her deck a gun….

From overside came a voice, “Get in your boat; you have no choice.
We will let you live now boys, but we cannot linger.”
So my mates and I did go into our boat and then did row.
Our ship was sunk with guns and as they left I raised a finger.

For two whole weeks we drifted in the sea,
And the winter gales would try to strike us blind.
And one by one, my mates were overcome,
But I survived, a vision in my mind….

Of icing sugar, jam and cream; the girl was in my sailor’s dream,
Eyes as blue as the deepest ocean sea,
I would not rest, I fought my best against the raging sea,
I would not pass until that lass was mine, oh Annabelle Lee.

I was nearly gone when a rusty freighter wandered close,
And a dozen rough but gentle hands raised me from the boat.
Though I spent a month in bed, one morning did I see,
Before my eyes, to my surprise: the girl from the bakery.

And icing sugar, jam and cream, it seemed just like my sailor’s dream.
Eyes as blue as the deepest ocean sea,
I raised my head and what I said was “Will you marry me?”
She said yes and I was blessed with the lovely Annabelle Lee.