Home Requiem for a Pilot/High Flight

Requiem for a Pilot/High Flight

This song is based on the immortal poem “High Flight” by John Magee, an American who joined the RCAF long before Pearl Harbor, trained in Canada, deployed to England, and was killed in a mid-air collision while flying a Spitfire – aged 19.

When I was a Flying Instructor in the 70s, I worked with a man from that generation, George Wolfe. He died in about 2005, and I was asked to sing something at his funeral. George idolized aviation, and I could think of no better tribute than to incorporate Magee’s poem into a song. I had to re-work it a bit – sonnets are not often put to music – but I tried to leave it as intact as possible. The choruses are of course mine. I’ve sung it at a number of funerals since.

As a pilot, everyone you have ever flown with is in some small way in the cockpit with you on every flight. They’ve all made you, helped shape your way of flying. That process never stops.

Requiem for a Pilot     ©2003 Dave Hadfield, with verses arranged from  “High Flight”, by John Gillespie Magee 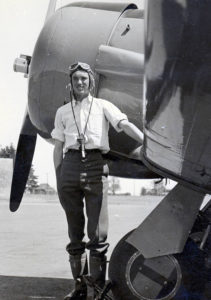 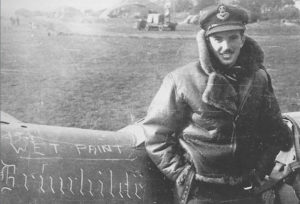 Up, up the long, delirious burning blue
I’ve topped the wind-swept heights with easy grace
Where never lark, or ever eagle flew,
The untrespassed sanctity of space,
And with silent mind, Lifting high, I’ve trod
Put out my hand and touched,
Perhaps the face of God. Touched the face of God.

And when we fly we’ll always fly with you….