My Father, Roger Hadfield, spent most of his airline career flying the DC-8. He was on it originally as a Second Officer in the 1960s, and finished up as Chief Instructor. In fact, his retirement flight at age 60 happened to be the last scheduled flight of the DC-8 there in 1994 – it was being replaced by the B-767 and others.

This coincidence was too rich to ignore, and brother Chris came up with this song – I helped tweak it a bit, and together with brother Phil (also an airline pilot) we sang it for him after he arrived that night.

He had a remarkable career – about 30,000 hours – in a remarkable aircraft. And he’s still flying light aircraft as of this recording, from the small strip on the family farm. In fact he’s completely as much in love with flying as he ever was… 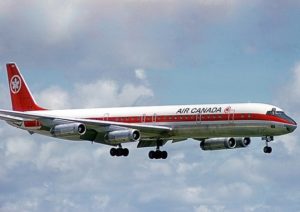 With my uniform still new,
Pressed and creased and blue,
I walked out on the ramp in ’65,
And when I got her in the air,
I was pleased and proud and scared
To get that silver bird into the sky.

Heading out across the pond,
The star-sight days are gone.
The INS knows where we’re gonna be.
But that don’t take away the thrill,
And I know it never will,
All the joy and the life you’ve given me

Now desert winds blow warm,
And it never rains or storms,
Like it did, 1000 times before.
And she’ll fade there on the ground
With her sisters all around
And those mighty wings will lift us up no more.

[chorus, repeat last line “together you and I”, end]