In 1994 my brother Chris was due to fly in space, riding the Space Shuttle Atlantis to the Mir Space-Station. Before launch he let each of us in the family know that we could send some small memento up with him. The space allotted to him was tiny – less than half that of a shoebox – but we were all struck by the opportunity. In a way, we were sharing the mission with him.
Our Father sent along the set of Pilot’s Wings he wore during his retirement flight at Air Canada. Mom sent charms from her bracelet… and so on; small things from my siblings.I decided to send along a song because it could be written on a sheet of paper – small and lightweight, right? So Big Smoke was written out longhand, and my children (who were young at the time) colored-in images of planets and stars and comets and aliens. We all signed it, and it rode with him for 128 orbits of the earth, 3.4M miles, and returned back to eventually hang on a wall in our house.
The words reflect the arrow of smoke that is left in the sky after the rocket has left the earth, pointing like a finger into the future. And also the fact that nothing is certain in space exploration, and our vision of what may come is always blurred as if by a mist, a smoke. 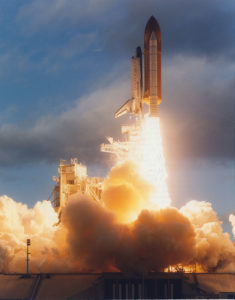 Big smoke, riding on the future.
Big smoke, growing from the past.
Big smoke, holding out a promise.
Not the first to rise and not the last.

Big smoke, no one says it’s easy.
Big smoke, more fragile than you seem.
Big smoke, carry precious cargo.
Show us how to fly and how to dream.

Big smoke, dropping from the heavens,
Big smoke, returning to your birth.
Big smoke, bring us what we cherish,
Bring us joy and bring him back to Earth.

Big smoke, bring us back our brother,
Bring us joy, and bring him back to Earth.