I became a Flying Instructor at the age of 19. Up until then I was totally focused on airplanes, but once locked in the cockpit with a student I came to realize there was a very human element. (You teach the person, not just a skill-set.)
In 2 years I was lured away by an airline, but Instructing was a very intense period. The experience taught ME, as much as I taught anyone else. I learned about aircraft and I learned something about human nature. The characters and settings were very memorable. Of course not all were positive.
The story of this song comes from an actual event that occurred. I’ve employed a bit of artistic license, but the accident happened. The student later did indeed come back, became my student, and finished the training; and the instructor survived and became my boss.
The other aircraft in the collision was very badly damaged, and unfortunately its occupants did not make it.
Flying can be glorious, but it is always unforgiving.

Yes, I know, the song is very long. (Songwriters don’t record 9-minute songs lightly.) I don’t apologize — it’s practically a novel. My son used to ask for it when he was young — so I’ve recorded it verbatim as I used to sing it to him.

Note: The C-150 in the recent photo below is one of the ones I used to fly as an Instructor during the time of the song. It’s still aviating! 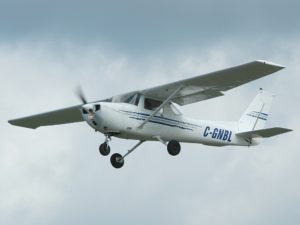 A mop and a broom don’t feel too good at the age of 43.
Tommy worked at the Safeway store; it’s where he’d always been.
They made him Assistant Manager and at the time it felt so great
But once in a while it seemed like a trick, to keep him working late.

No one can say that pricing stock is food for a growing mind
But Tommy had a sure-fire way to keep from going blind.
His body was there with the frozen food but his mind was way outside
Floating as free as a child could be in the wild, inviting sky.

And Tommy had a dream: he dreamed that he would fly.
He was no longer young, but the dream had never died
He’d cross that hangar floor, and lay his money down
And his spirit would leave, all his limits, back on the ground.

A price check call, started it all, and eyes of endless blue.
The new girl smiled when he met her — a thing long overdue.
As he bagged-up fruit he casually said, “I’ve been learning to fly.”
She handed out change and replied to him, “That’s great – so am I.”

For once in his life he was tired of dreams, and tired of just making plans.
For her to find out he was faking, was more than a man could stand.
So made his way to an airport, a small strip at the edge of town.
Paid for a ride, climbed inside, and finally left the ground.

There was no turning back; he was captured; hungry for taste of more.
His hands on the wheel soon told him, it’s what he was living for
And back at the shop, the bright blue eyes, listened to him run-on
As he spoke of flaps and fuselage, prop and aileron.

Climbs, glides, turns, slides, spins both left and right
Circuits and bumps, horrible jumps when
He scared everything in sight.
After one hop his instructor, said “Stop, I’m getting out.
“Take it away by yourself. You’re ready. There’s no doubt.”

There was noise, light, blood, cries – the world spun round and round
The airplane shook like an buzz-saw, and screamed its way on down
The man on his right was broken, his face a mask of red
It was Tommy alone, the rock below, and nothing more to be said

The papers called him a hero, the phone rang off the wall,
But he couldn’t forget the terror: that empty, endless fall
After a month he tried it again, but couldn’t take any more.
And watched the planes from the flight-line, went back to the empty store.

Where he didn’t seem to react much; his face a mask of stone.
But the bright blue eyes soon realized, he’d never been more alone.
And late one night they closed the shop, and she had never planned,
To lead him on, or direct him, but she took him by the hand.

Now the lights are on at the Safeway, and the price is on the shelf…
And the store gets run, the chores are done, but they’re done by someone else…
And if you should take up flying, at the strip at the edge of town…
You’ll meet a man with his dreams in hand goin’ up, and coming down